WARNING: Potentially NSFW content. Read at your own risk.

* (Thanks to the one who pointed it out)

2 channel's reactions after the jump!
Posted by rocksaltcheese at 7:12 PM No comments:

Kenji Darvish of Golden Bomber: "That pissed me off. Why would shop employees tweet that?"

July 8, Darvish updated his blog: "Apologies for this late night update... I just got pissed off". Darvish did not mention the name of the restaurant, the person, and the tweets in question, but he said: "I was just eating at a restaurant a while back, and I'm not sure if that guy was a staff member, but it seems that person tweeted the events as they went on; in full detail".

"It didn't seem like anyone noticed me at all... Where were they watching me from? Scary!". "To think that the food was actually good. How should I put it, this just left me with such a bad aftertaste. Actually, it gave me a bad impression.".

Not just celebrities, but intrusion into one's privacy is generally not accepted. "Why would shop employees tweet something like that? Weren't they taught not to do such a thing? I have experience in customer service and I really don't get this. I don't think I can eat out in peace anymore. It's all so troublesome." "Stress! I'll go run for a bit."

Other Twitter incidents involving celebrities are Junichi Inamoto and Miho Tanaka's date before they got married in 2011, which turned into a huge media circus. Recently, Kyary Pamyu Pamyu and Ebizo Ichikawa both complained about being pictured without permission last month. Akemi Darenogare and Hachimitsu Jiro also complained about similar incidents soon after. 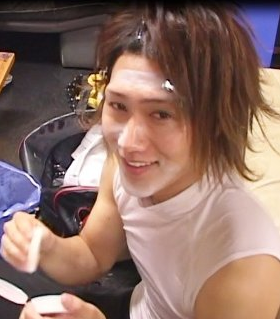 His jean-wearing character Kohei Kuryu, an unorthodox prosecutor has aged as well. Kimura said that he didn't change the way he's portraying the character but said "with more experience under his belt, I felt that the character shouldn't be rough-edged as he used to be".

It may seem like he's always taking the long route, but Kuryu's prosecution style is as relentless as ever. "He's not really efficient. But I'm thinking that this attitude of ignoring your ego and desires is alright, especially for someone who decides whether a person should go to trial or not.".

When asked about what the viewers should look out for, he said: "Well, there's not a single person here who has special abilities in this one, but I hope people will understand the meaning of the title HERO".

Q. The World Cup still isn't over. Do you like soccer?
A. Cho suki desu. I did some martial arts when I was little, but if I had the chance to choose what to do, I would have wanted to play soccer. I'm from the Captain Tsubasa generation, so I wore jerseys in the same manner, and albeit unnecessary, I'd shout 'Deyaaaa!' whenever I would kick the ball.

Q. Kimura-san, who is your [HERO]? (Chiba prefecture, 14-y/o Moe-chan)
A. Guys like Argentina's Messi and Brazil's Neymar. They may be a whole lot younger than me but I think they're unconditionally cool. That's true with all sports athletes in any field. I can't choose them all."

Q. How do you memorize long lines? (Ibaraki prefecture, 53-y/o Hiromi Usami-san)
A. Determination. I'd actually like to know if there's a trick to it. Maji de. 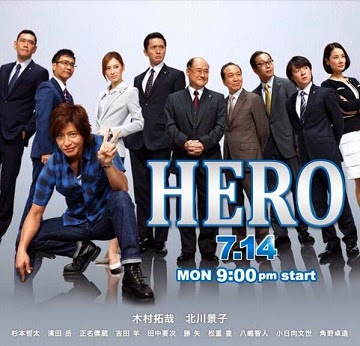 http://blog-imgs-69.fc2.com/2/c/h/2chmatonet/HERO.jpg
2 channel's reactions after the jump!
Posted by rocksaltcheese at 6:58 PM No comments:

Hayao Miyazaki (retired) still comes to work everyday to give advice; Producer Suzuki: "I hope he goes away soon (laughs)"

With this collaboration comes an app called Mitsumeru Ghibli-ten, where users can view an exhibit of the movie's art director Yohei Taneda's works, as well as the buildings and structures that have appeared in past Ghibli films, on one's smartphone.

Suzuki comments: "You see it flat on the silver screen but these scenes come to life in 3D on your smart phones. We work in a predominantly 2D environment, but we are also impressed and fascinated by 3D. And being able to do something like this is pretty fun. Even Mr. Walt Disney's last work and efforts was poured into Disney Land.".

Mr. Suzuki also gave updates on director Hayao Miyazaki (73), who announced his retirement from doing feature films in September last year. "He already announced his retirement, but he still comes to work every day. I hope he goes away soon. (laughs)". Maybe he's has nothing else to do, but he apparently comes to work and passionately trains the younger generation. "He said that he won't intrude nor help the young ones, but he immediately gives out instructions and shows them how its done".

Suzuki also praised director Yonebayashi and producer Yoshiaki Nishimura.
"When you compare them to the two great masters (Miyazaki and fellow director Isao Takahata), they were able to finish the production in half the time. And despite the time constraints, I am impressed by the quality of the art and animation that they have produced.". 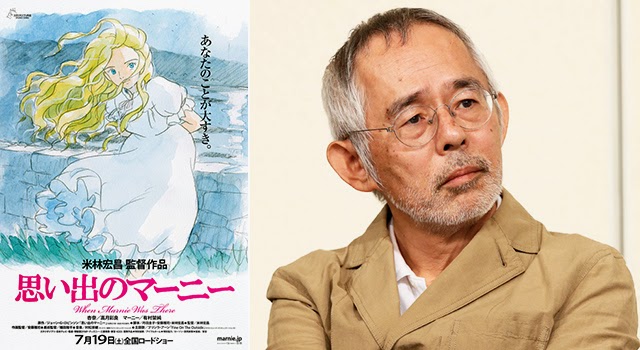 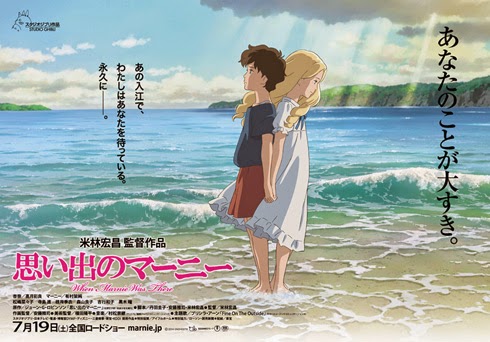 http://image.itmedia.co.jp/nl/articles/1405/28/ys_omo03.jpg
2 channel's reactions after the jump!
Posted by rocksaltcheese at 7:53 PM No comments:

The press meet for the movie Kawaki was held at Nihonbashi's TOHO Cinemas on the 28th last month and was attended by the director Tetsuya Nakashima, Koji Yakusho (58), Nana Komatsu (18), Miki Nakatani (38), and Ai Hashimoto (18). People were quick to point out on the Internet how Hashimoto looked lifeless.

This is Komatsu's movie debut, an according to Hashimoto: "She's very cute and pretty, and I don't exactly know how to feel when I'm beside her, but I want to keep seeing her blossom and hope that she meets people who will cherish that appeal that she has. I really like her", but had a blank face the whole time and wasn't smiling too much.

Net users were quick to comment: "Is she tired?", "Too much negativity coming out from her", "She used to be so much cuter in Amachan...".

Hashimoto was a model in the magazine Seventeen from 2009, and put her name on the map with her role in Tetsuya Nakashima's Kokuhaku. Her role in the 2013 movie Kirishima, bukatsu yameru tte yo earned her the Best Newcomer award at the 86th Kinema Junpo Best Ten awards, and was recognized as well at the 36th Japan Academy Awards. She went on to play a major role in the morning drama Amachan in the same year, and also made her appearance at the Kouhaku Uta Gassen with the rest of the Amachan cast.

While Amachan was airing, Hashimoto was reported to have spent the night with Motoki Ochiai, a co-star of hers in the movie Kirishima, bukatsu yameru tte yo. Ochiai was criticized at this time for having sexual relations with a minor. Three months later, Hashimoto was reportedly seen dating Gou Ayano, an actor 14 years her senior. By this time, Hashimoto was being called a "devilish enchantress" and a "slut". She was then seen in December to have slammed a signboard in Shinjuku, and was also called "fat" when she received the Best Newcomer award at the Élan d'or awards last February. 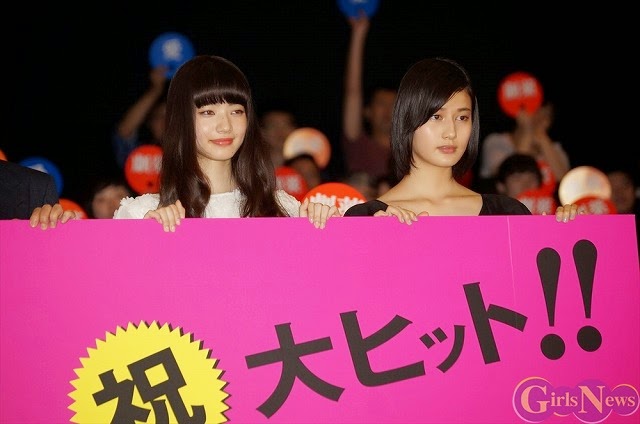 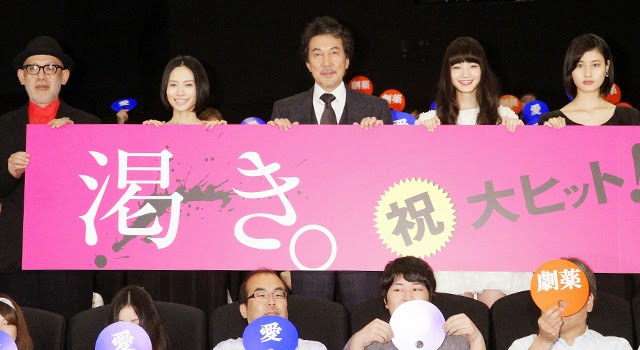 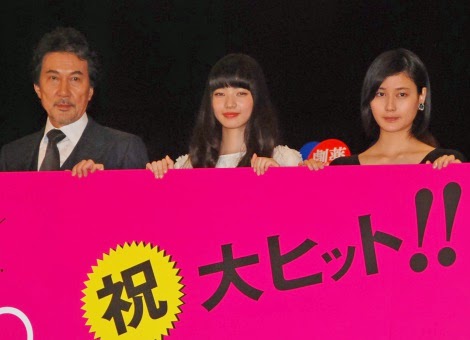 http://media.image.infoseek.co.jp/isnews/photos/oricon/oricon_2039165_0.jpg
2 channel's reactions after the jump!
Posted by rocksaltcheese at 7:38 PM No comments: 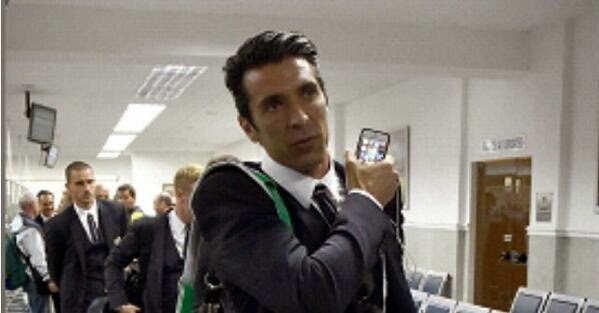 2 channel's reactions after the jump!
Posted by rocksaltcheese at 7:43 PM No comments:

Natsuna looks back and says: "I wasn't just just on the verge of depression, I literally broke down. There were a lot of mixed reactions to the drama even while it was on air, even after it ended, and I felt like I was living through all those criticisms which were aimed at me. Those were really tough times.".

Jun to Ai's ratings averaged 17.1%, and isn't exactly bad when you compare it to others in the past 10 years. But it came after Umechan Sensei, a drama that averaged over 20% -- a feat that wasn't achieved in the 18 series that preceded it -- and was succeeded by Amachan, a drama that became a social phenomenon, which in effect highlighted Jun to Ai's shortcomings further.

"I literally didn't want to do anything after we finished shooting, and had no motivation at all. Even if I did do something, I didn't have the confidence as I was paranoid that everyone will still think that I'm 'the girl who had a mixed reception in the morning drama'. I didn't want to appear in front of people too much at that time. I even considered seeking medical attention." She was afraid of taking the next step, but the core fans of Jun to Ai helped her suppress all the negativity.

This was at her handshake event to commemorate the release of her picture book last January. "I read all those letters they compiled from the core fans of Jun to Ai. I went home, read them, and choked since I cried so much... But that made me feel refreshed and helped me move on." 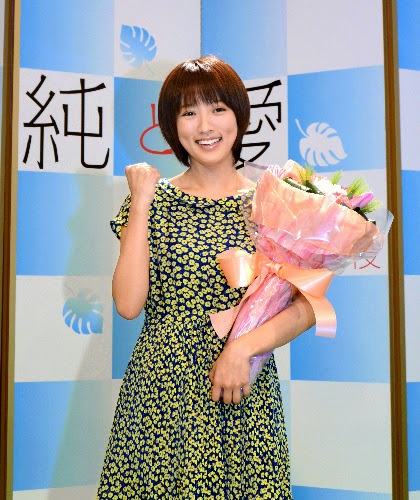 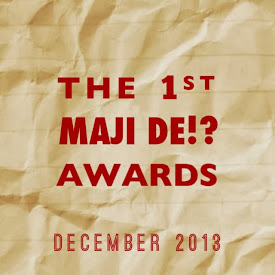